New puppy pounces on tossed toy,
trots it back,
paws pounding on wooden floor;
mouths, chews, searches for squeak;
dashes behind sofa—
head protrudes below skirting,
upside down!
disappears, darts out,
gnaws the wooden foot;
launches herself
onto the white pillow at my wife’s feet;
tracks the single strand of yarn
dancing to the crochet baton above;
barks;
attacks ball in basket and sprints,
paws thumping on rug;
suddenly somersaults
bumoverteakettle,
intertwined
in a woolen mesh.

The eve of Valentine’s Day he died,
Hours before the mad rush for roses began.
We learned of his death this morning—
Valentine’s Day—
When the belated e-mail arrived.

Red roses for beloveds,
Yellow for friends,
Lavender for mothers,
White for the departed.

Years before I had inscribed him
A copy of Maggie Brown’s “Runaway Bunny”
And left it with his grandmother.
(The author, to demonstrate
Her robust surgical recovery,
Leapt out of bed,
Gave a Can-Can kick in the air,
Threw a pulmonary embolus
And promptly died in Nice.
No one expected her untimely death at forty-two;
We knew the boy was dying at nine.)

Our new puppy fetches
The old toy again and again;
Silently, we eat a hot meal
To ward off the wintry chill.
In fading sunlight
The white rose
Sheds its petals,
One by one.

In between low granite walls
Two workmen stand in snow,
Watching as the steel rod falls
To pound the earth below.

Some distance from their younger years,
I pause in my descent;
The pounding sound pricks up my ears
And echoes some lament.

In the distance whistling sounds
Break through this winter day;
The noontime ironhorse resounds
And bleats a hollow neigh.

Down among the bittersweet
Descending in a rush,
Bluebirds peck the russet meat
And flit among the brush.

Small warm-breasted fires burn,
Reminding me in winter’s chill —
Though every creature waits his turn —
I move among the living still.

When Winter, in her flirtatious ways,
In part to tease, part to amaze,
Showers down her powd’ry air
Upon the Lantskip, cold and bare,
I sit amidst my books and things
And ponder idly what Winter brings:
Ice and cold and snow and chill,
Titmice on the windowsill;
Steel blue skies with ravens black,
Icy dams that groan and crack;
And in the night, while half asleep,
The snowplow rumbling down our street.
The air grows cold, the house now still;
The furnace coughs —
Then burns to break the chill.

“These pleasures Melancholy give,
And I with thee will choose to live.”

Time is but the stream I go a-fishing in. I drink at it; but while I drink I see the sandy bottom and detect how shallow it is. Its thin current slides away, but eternity remains. —Thoreau, Walden

My friend and I both agree: we have never seen the river so shallow as this year.

For the first time in as long as we can remember, certain rocks, previously hidden, are now visible, having risen Brigadoon-like from its watery depths. What was once the beginning of the sluice that diverted river current to power the turbines in the old mill is now clearly outlined by the sweep of river rock just west of the bridge, and the bases of the concrete abutments downstream are readily apparent where the old Tunxis bridge once spanned the gorge.

We dip and swing our paddles beneath the bright sun and faultless blue sky. The old blue wooden-ribbed boat glides silently through the clear water. Arrayed along the sandy river bottom, the last leaves of autumn are clearly visible, a patchwork of yellows and browns.

Shortly, we kick up a gaggle of six Canada geese. Their wide wings beat the air, lifting heavy bodies off the water’s surface in a cacophony of honks and splashes. In formation they fly upriver, then at the last moment diverge at the steel bridge, four birds ascending above, two below.

Gradually, we move upstream against the current; continually, it beckons us back; but still we force our way forward against the flow of water.

Scoured trees stand sentinel-like, guarding the brambled banks. Any number have been undone, strangled and broken by the ubiquitous yellow-orange bittersweet.

Eventually, we turn the canoe in a grand sweep and begin our descent, drifting downstream, no longer fighting the force of the current.

A red-shouldered hawk drops from its perch and silently disappears into the woods.

As the thin current carries the blue boat along through the mirror of blue sky, past the leafless trees, now stark in their late autumn nakedness, soundlessly we become one with the water and the overhead expanse, drifting through momentary lapses of time into the eternity that remains. 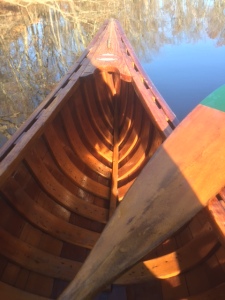 to a young child

Márgarét, áre you gríeving
Over Goldengrove unleaving?
Leáves like the things of man, you
With your fresh thoughts care for, can you?
Ah! ás the heart grows older
It will come to such sights colder
By and by, nor spare a sigh
Though worlds of wanwood leafmeal lie;
And yet you wíll weep and know why.
Now no matter, child, the name:
Sórrow’s spríngs áre the same.
Nor mouth had, no nor mind, expressed
What heart heard of, ghost guessed:
It ís the blight man was born for,
It is Margaret you mourn for.

“I had three chairs in my house; one for solitude, two for friendship, three for society.” ― Henry David Thoreau, Walden.